Volunteers thanked for their time

DFTRA Directors Christine Phillips and Phyllis Rowley were presented with lovely bouquets of flowers at the Gas Progress meeting on the 30th June 2010. The flowers, along with kind thank you letters were given as a thank you from Colin Harris, Vanessa Seeney and their colleagues for Chris and Phyllis’ continued attendance and input at Progress meetings. 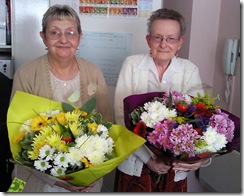 They were praised for their commitment to voluntarily giving up their time to make a difference.

Both were over the moon with the gesture and responded by saying how surprised they were as it is not often that volunteers are acknowledged for their efforts, and that they are always made to feel welcome at the meetings which they are more than happy to attend for as long as they are invited.

This site uses Akismet to reduce spam. Learn how your comment data is processed.

Welcome to the DFTRA website. Here you can find information on who we are, what we do and how we can help you. You can also see what we have coming up in our calendar, and keep up to date with Federation news. The purpose of Dudley Federation is to represent the Tenants and Residents Associations and help them in any way possible. For more information, please visit the About Us section of this website.

How to Find Us

If you wish to visit our office, please call ahead to arrange an appointment with the relevant person. You can call us on 01384 868010 from 9am  5pm Monday – Friday or email info@dftra.org.uk.